On 3rd May the Cooperide took off for their tour to Ende Gelände in Germany. But before the riders startet their journey in Malmö they wanted to send out a message to Vattenfall, to the Swedish government and the public. Here is what had to be said.

We have gathered here today to mourn those who have already perished or been affected by climate change – and all of us who will be.

Swedish state-owned energy company Vattenfall has been mining lignite in Germany for years, emitting as much greenhouse gases every year as Sweden as an entire nation. Now the mines are being sold because Vattenfall has governmental orders to “move away from fossil fuels”. But selling the mines to someone else, who will keep mining the coal, will not make the emissions disappear. The climate doesn’t care who is emitting what – every gram counts no matter who it comes from. And Sweden is one of the best positioned countries in the world to show climate leadership and make such a move as to stop the sale and responsibly phase out the mining. 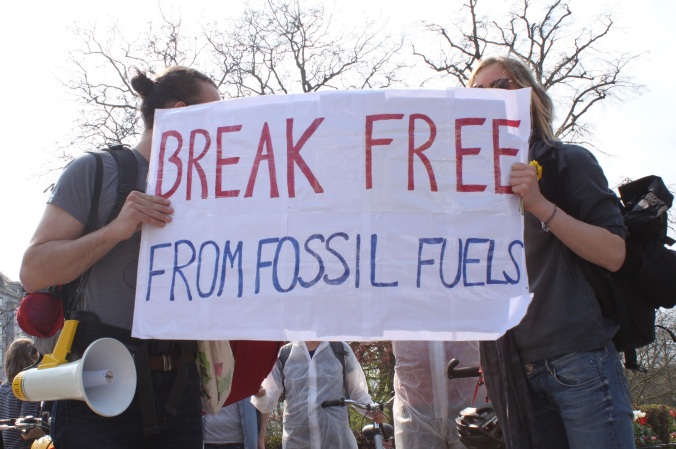 Less than two weeks ago, on April 22, Sweden was one of 175 countries that signed the Paris Agreement, thereby committing to keeping the global average temperature increase to well below 2 degrees. Dumping OUR coalmines on a ruthless company lobbying for a “coal renaissance” in Europe is the absolute opposite of what we have agreed to do. The coal still in the ground is worth 24 years of Sweden’s annual national emissions. We MUST keep it in the ground. The Vattenfall Deal is Sweden’s tipping point.

We have gathered here today, also to celebrate. To celebrate that we see the beginning of an end, as coal and other fossil fuels are becoming a thing of the past: China is stopping the construction of new plants; coal companies are going bankrupt; and more jobs are created in the renewable energy industry than in the fossil fuel industry. And we WILL celebrate our elected politicians who are courageous enough to see beyond short-term profits and elections, and who stand up for people and the future we need.

I celebrate you, we, ordinary people, who are acting out of respect for all life. We are writing, speaking, organising, painting banners, baking cookies, biking. We are acting together, across borders and social boundaries, because we know we have to do something. And we are. Life and Love is what connects us all. Let’s stop the destruction of it. Let’s break free from fossil fuels.

Last year, when the Cooperide took off to Paris, we did it for many reasons. It was fun, yes, it was an adventure, but most of all, we saw it as our responsibility. A responsibility we have towards, each other, towards our children, towards all living creatures on earth, and not least towards ourselves. We cannot run away from our responsibilities and so we decided to cycle towards them. Today, we are going to do the same!

Since last year we are saying: Climate Change is the consequence of disconnection! Vattenfall, I want you to listen now, because this is directed towards you! We caused climate change because we tried to disconnect the profits we make from the damage we do. You did that! You removed people from their homes the same way you removed the ‘overburden’ from the landscapes. You made obscene profits with the misery of environment and people. And now, Vattenfall, you are running away from your responsibilities. Let me be clear: WE WILL NOT LET YOU DO THIS!

We also said this: The solution is to connect! To reconnect with the people, the landscape and the climate you helped destroying. It is not too late! The age of coal is over, you know that! The age of resistance against destructive profit seeking has come! We are history knocking at your door. Will you answer?