We got pretty cosy last night. Celebrating the final day for several of us, we skipped our usual group plenary and instead enjoyed an abundant and delicious dinner cooked with loving care by our food team, had fun painting banners/stencilling t-shirts and danced to disco & electro-swing.

So with our convivial integrity restored, we woke in the Lutheran church hall on a Sunday morning to see dustings of snow outside. As we packed up our bags and got ready to depart, the snow intensified into a blizzard. With chilly fingers and toes, we hugged dear Anni goodbye and welcomed a local called Frank to join us for the day. He navigated – reminding us of the value of local knowledge – the 15km to Dinklage where we were greeted by the mayor, the local press and 3 cycling enthusiasts. At Dinklage Rathus we were served tea and coffee and bid a fond farewell to rider Hauke, who had to head back to Berlin.

The weather brightened up for the rest of the afternoon and the ride was very cold but also sunny. The last 20km featured 3 sharp climbs, making particularly the trailer boys and the Captain on his recumbent sweat but providing speedy downhill rewards.

We rolled into Osnabück in crisp twilight to meet our hosts at SubstAnz, an alternative centre and social space close to the middle of town. After a delicious vegan dinner, the guys at SubstAnz co-hosted a public meeting about COP21 composed of Cooperiders and local activists. Julian represented our group by giving a short presentation about our tour, and an explanation of the UN negotiating process, as well as what outcomes are to be expected at the conference. We talked about what was planned from an activist viewpoint and how this has changed since last week´s terror attacks. Julian shared our view of Paris as not an end in itself, but a convergence, where activists will be making plans for 2016 and beyond. Since the mass mobilisations in Paris have been officially cancelled, local action was emphasised as key and this provoked a networking meeting of local activists to plan actions during the COP. Afterwards we screened This Changes Everything in the bar area of the venue. 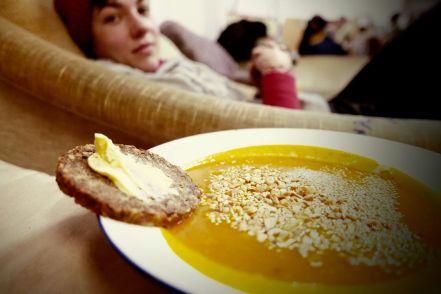 Delicious soup from our hosts

Input about actions in 2016

PS: If you haven´t yet read Naomi Klein´s latest piece on the Guardian, do so immediately.

PPS: We have now pedalled 680km, so after 20km tomorrow we will have [theoretically] reach the halfway point!