We are riding through the Ruhr area, a highly urbanized region, the most densely populated part of Germany in fact, where there were (and still are to some extent) hundreds of coal mines. Germany´s energy system has changed a lot since the Ruhr region was it´s powerhouse, particularly due to the recent Energiewende. However riding today the legacy of the coal industry was plainly evident.

Most relevantly for us many of the old railway lines have become bike paths. Led by a local bike buff called Tim, who we´d met at Bochum Volkshochschule the evening before, we escaped urban sprawl and roundabouts by taking one of these bike paths between Bochum and Essen. During our ride we passed two enormous coal mine museums, which are actually our favourite kind of coal mine. 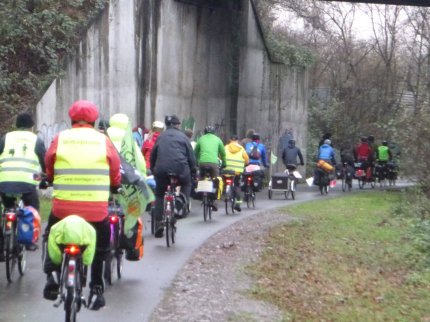 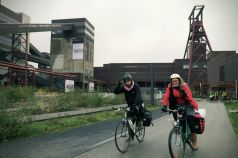 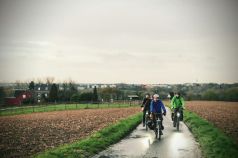 A large number of day-riders joined today, which is a positive endorsement of our project but doesn´t come without challenges. Those of us who have been riding together for many days now are accustomed to rolling smoothly and communicating effectively, but we are recognising that for the unaccustomed this doesn´t always immediately click. So this evening we decided as a group to make an extra effort to incorporate day riders, to make best use of their local knowledge and connect with their contextual environmental agendas.

In Essen we met with a group of local climate activists who had prepared a demonstration for us to participate in. The action was targeted at the energy utility giant STEAG who have recently expressed their interest in purchasing the Lausitz lignite coal mine from the Swedish energy company Vattenfall. Our message to STEAG was a simple one: “Buying Lausitz is buying resistance”. We took individual photos in front of STEAG´s headquarters with a board saying “I´ll be back, Lausitz 2016”, making the pledge to return for further demonstrations if the deal goes ahead. After some astute words from Theo on the megaphone about the connection between global climate change and decisions made in corporate board-rooms, we sang them a song* and went on our way. 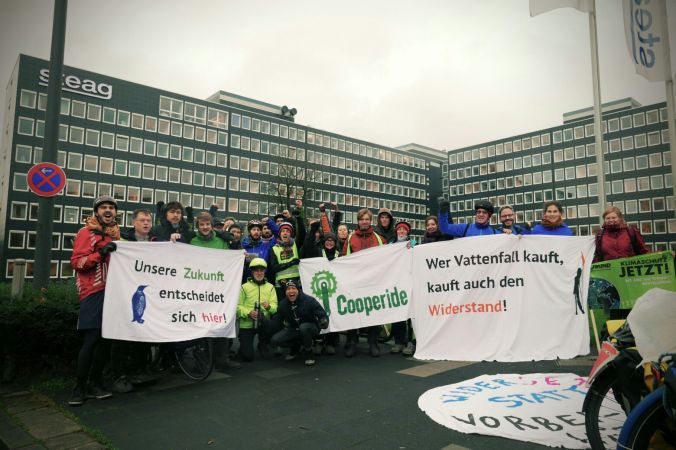 After yesterdays challenging weather, today felt like a walk in the park. A park with a lot of hills, but still, it was dry and not too cold. The most scenic part of our route was a lovely section running parallel to the Ruhr river, where we took our afternoon break. Another memorable moment was when we were stopped going on our GPS route because it was private estate. Our commitment to consensus based decision-making prevented an impulse decision to continue regardless of the rules and after some discussion we opted to go around the park´s fences. A reflection on this from one member of our group was actually one of pity, “they are the ones in a cage, who build a fence around themselves”.

For the second night in a row, we stayed in Die Falken accommodation, which is a youth socialist association. Both centres have been comfortable and spacious. This evening our food team cooked a superb dinner, completed by a chocolate beetroot cake. We were happy to be joined by two friends from Lund who live not to far away, Marthe and Caro. Less joyful is that it´s Jacob´s last night who has been an ever-present source of good vibes and solid companionship on the road. We´re glad to welcome Natan, Tobi, and Thomas to group, all of whom plan to join us through to Paris. 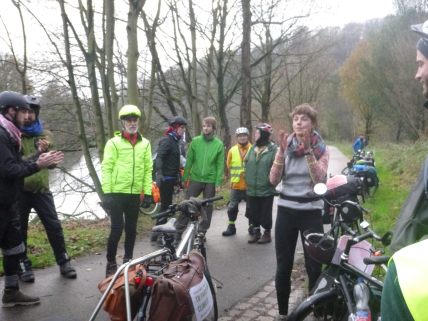 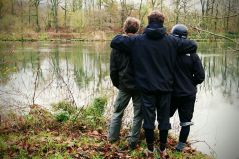 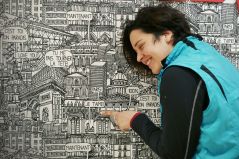 *We now have something of a theme song, which was composed to brighten up spirits as we roll. To the tune of a song known as “I like the flowers” the adapted words are: “We hate the coal mines, we like Naomi Klein, we like the wind turbines, with them we might be fine, And we like to ride our bikes when the winds are strong.”