We are a small group this time and we feel this when people are joining or leaving: it always makes a significant difference. Saturday morning, Christian and Stefan, both of them great bike enthusiasts, where joining us. They enriched our ride with their enthusiasm and made it easier by carrying parts of our luggage and helping us navigating into Hamburg. In the morning, we were riding along rather big streets and noticed the difference between bike lanes in Sweden and in Germany: in Sweden the quality of the paving was much better. However, in the afternoon we were riding along an old train track which has been transformed into a beautiful cycle lane. Trees on both sides where protecting us against the rain and we were riding steadily at quite a fast pace. 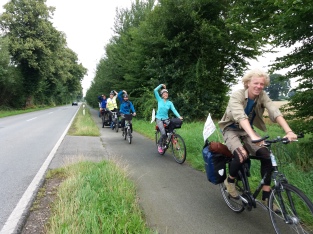 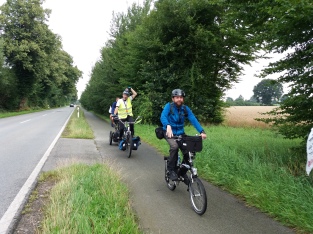 On the last kilometres, on our way through Hamburg, the rain became stronger. We first picked up a trailer from Christoph’s place. The whole group made that detour because we did not want to split up: our community was our motivation and keeping smiling at each other allowed us not to mind the rain nor the cold.

In Hamburg we stayed at the office of the ADFC, the local cycling association. We watched the movie “Beyond the red Lines”. It moved riders as well as visitors to see the pictures from the 2015 Climate Camp in the Rhineland, from Ende Gelände and the Paris Conference. We could especially identify ourselves with the people joining the Alternatiba Bike Tour which travelled 3600 km through France, connecting regions, people and ideas as we do it, too. After the movie we discussed about what we had seen and I think that even if we all were remembered of how big the stakes are, we still all felt empowered at the same time: we as ordinary people can make change happen if we organize and connect which each other. 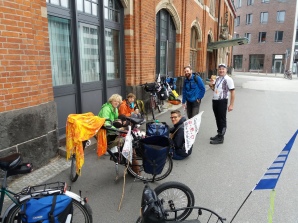 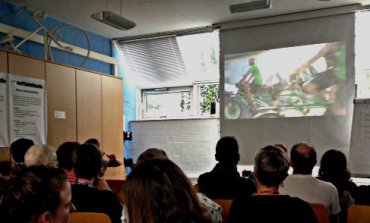